Why is Xenon Used in Car Headlights?

Xenon headlights were developed in the 1940s and introduced in 1951 to become a replacement of the inefficient carbon arc lamp. They provide not only better and brighter illumination but also longer lifespan than conventional halogen headlights.

Xenon is a gaseous element that can emit a bright white light when electricity passes through it. Xenon lights utilize that xenon gas instead of halogen gas and also use an electric arc in place of a metal filament to provide more lumen while consuming less electricity, making them more energy-efficient.

Firstly, electricity passes through the ballast to the bulb’s electrodes. This ionizes the xenon while creating a “bridge” between electrodes. Then, the ionization of the gas rises the temperature and the resistance between the electrodes is reduced. Finally, the xenon ballast supplies the bulb with constant power of about 35 Watt and allows the bulb to operate at full functionality, delivering bright white light.

Note that, the xenon gas only gets used in the initial phase of illumination. After that, other gases inside the bulb gets ionized, then, they take place xenon in providing bright illumination.

There are 5 top advantages of xenon headlights.

Xenon headlights produce a very white light as the xenon system mimics that of natural daylight.

When you are driving at nighttime, you can make your environment seem like daytime using xenon headlights. They are brighter than both halogen lights and LED lights.

The xenon gas containing in the bulbs will not die or become insufficient anytime soon. Xenon headlights will last for as long as 2,000 hours of usage.

Xenon headlights have very good energy efficiency which will save your battery power. You only need a higher amount of energy during startups and then they use far less energy during the normal operation.

However, there are some drawbacks as you can always find.

The brightness of xenon light can cause glare to reflect in other cars’ mirrors and affect other drivers on the road. Which will make it more difficult for them to see the road and can even rise the risk of accident.

Xenon headlights are one of the best and brightest, which means they are also one of the most expensive headlights in the market. 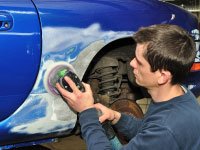